His confession is a great little essay. I link to it here because it resonates so well with my experience doing the Thousand Sketches. I don’t have characters, but I do have stuff that appears off the end of the pen.

I have developed a deep affection for my abiding characters and symbols, they nourish me greatly. Many times since the duck and teapot revelation their strange antics and adventures have anticipated the course my life would take. I respect their integrity and eccentric ways to an absurd degree. They appear off the end of the pen, at that wondrous point of connection and delight, and place themselves freely in my drawings. They ask for things and do what they will. They surprise, disturb and inspire me. I observe them with bemusement and respect. I let them be and eventually I hear what they are telling me.

Archons are the baddies, viruses, mind parasites, beasts, devils. They are the ancient enemy of the earth. I am not sure what it all means really, but it made me think of the wonderful metal spider in the DIA N.Y. Beacon. Not sure of the artist or name of this sculpture but will add later. 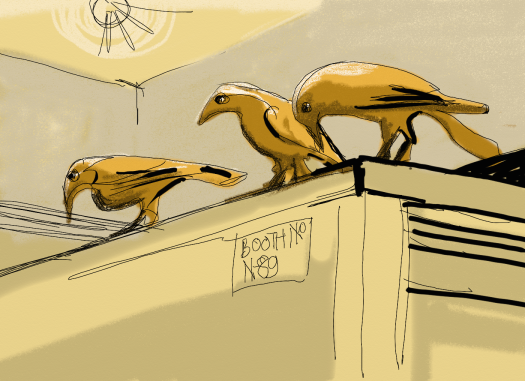 Completing one I began in New York. These are bronzsz just casually placed in the subway. I don’t know the artist, if someone does please let me know. Tiny sculptures are easy to stumble upon in the New York subways, wonderful!

I think the top one is slightly better.  Copied and saved BMP as a JPG

The bottom is exported to Tiff 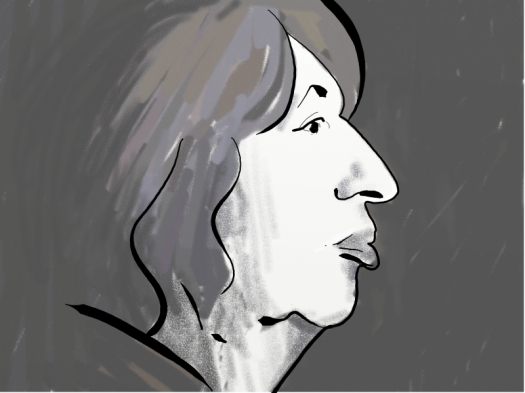 I am attracted to Lee Krasner’s work. I think it is her struggle, and how she is in Pollock’s shadow. True, any drip painting by Pollock shines, but behind that light I see the Krasner shadow. Her statements about art are ok too. I have an earlier sketch of her from a self portrait, this one is from a photo in the Hobbs book.

END_OF_DOCUMENT_TOKEN_TO_BE_REPLACED

I am reading the book by Janine Burke, the Heart Garden about Sunday Reed. I have just got past the intro with the details about her upbringing, and now about to learn about a few Australian artists, including one of my favourite, Arthur Boyd.

This morning I thought I’d have a good shot at moleskine style sketchblogging. There is a tradition here I semi-tap into and is close to what I aspired to at the start. Sketches. I got a bit carried away and that is OK. I think I am finding style in this genre that I may be able to perseverw with for a while, especially once the 1000 are done.

The title “I would like to place my mind inside the bowl.” is not sketchbloggy at all, but a quote from the Thai Buddhist artist Montien Boonma who did bowl sketches as a meditation.

END_OF_DOCUMENT_TOKEN_TO_BE_REPLACED

I have been reading a Henri Geldzahler interview with Ellsworth Kelly (he does the the advanced simplicity!). he said of his work:

I have been reading Robert Hobbs, Lee Krasner

The Gray Slabs and the Holocaust

There may well be other, heretofore unexplored factors besides Krasner) difficulty of coming to grips with intuition that explain why most of her works during the years from approximately 1943 to 1946-47 so often end up looking like gray slabs of paint, which she referred to as gray stones.

As Krasner explained, “I went into my own black-out period which lasted two or three years where the canvases would simply build up until they’d get like stone and it was always just a gray mess. The image wouldn’t emerge… I was fighting to find I knew not what.â€

On another occasion, she referred to them as her “mud period.”

“I was saying, I paint. I paint every day. This is what’s happening to me.” Krasner said. I faced the issue very aggressively. I was having a rough time, and I didn’t care who knew it.”

None of these experiments with intuition now exist, because Krasner subjected them to a thorough soaking in the bathtub before scraping them down so that she could reuse the canvases.

A possible explanation for these dense, turgid works of the mid-1940s is that they were subliminal reactions to the mass murders of Jews in Nazi-occupied Europe, which were then being publicly acknowledged in New York.

I think she is courageous just to keep going for three years with stone slabs! That must have been agony. I felt the loss of those gray stone slabs. I wish she had honoured her process more and kept them. This one is in my sketch of that story. One layer has “1944′ written on it. The time Krasner was in this mud. Also the year I was born, in occupied Amsterdam.

Reflections on the process, what I am up to, reading & thinking about.

END_OF_DOCUMENT_TOKEN_TO_BE_REPLACED 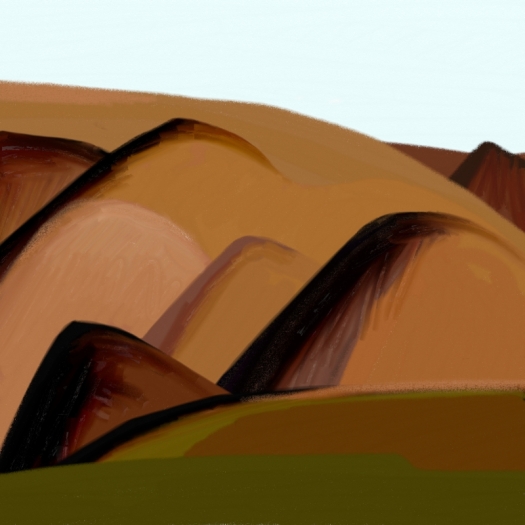 Re-worked it more. Now it looks a bit McCahonish, but maybe that is just the way hills work. Keep going, get those hills down. I just had a look at McCahon, some snaps follow. I like it that I am closer to home, and closer to now.